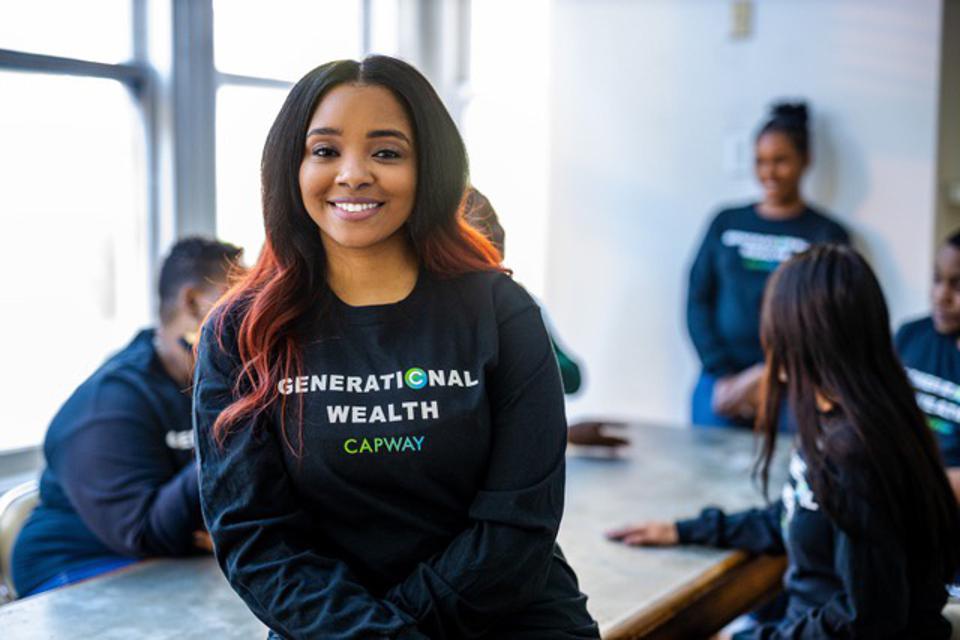 Nearly one-quarter of adults in the U.S. are unbanked (they do not have a checking, savings, or money market account) or underbanked (they have a bank account but also use an alternative financial service product), according to the Federal Reserve. That’s nearly 60 million people!

Sheena Allen—raised in Terry, Mississippi, started building apps in college, worked in Silicon Valley and Austin—is uniquely qualified to understand and seize the opportunity that the unbanked and underbanked represent. When others didn’t see the opportunity, she stayed steadfast.

Her company, CapWay, provides bank services and financial education via a mobile app. The social content presents financial information that Millennials and Gen Z can relate to.

Allen is a role model for all those women and girls who are told, “no, you can’t.”

While in college at the University of Southern Mississippi, Allen built her first app. It didn’t sell well, but she discovered her passion for technology. She continued to build apps, including Dublin, which, at its height, was downloaded 10 to 20 thousand times per day.

The first in her family to graduate from college, her parents still wanted Allen to have a more traditional career. But Allen was headstrong and saw something else in her future. Much to her parents’ chagrin, she wanted to be a techie.
Allen got a job in Silicon Valley. What a culture shock! In rural areas where Allen grew up, it was not uncommon to drive 30 to 60 minutes to find a bank. Instead, residents cashed their checks at the local grocery store and, all too often, when they needed a loan, they used predatory payday lenders.

“There were a lot of banking deserts, particularly in the South and the Midwest,” said Allen. However, the problem isn’t unique to these regions, and it exists throughout the U.S., including California and New York.

Allen saw the opportunity the unbanked and underbanked represented for mobile digital services. “I felt it was my duty to take those two worlds, put them together, and create a solution to the problem,” she said. Since 2016, Allen has waxed prophetic about the coming of the cashless economy and mobile banking, but few investors got it. They thought the unbanked and underbanked were opportunities in Africa, Asia, and Latin America, but not in the U.S.

In 2019, Allen launched CapWay, a neobank and fintech startup aimed at the unbanked and underbanked.

The pandemic focused people’s attention on social injustice and economic disparities in the U.S. The upheaval gives rise to a better understanding of the impact of racial, ethnic, gender, and geographic inequities on every aspect of life, including personal finance.

The point was driven home when the government wanted to distribute stimulus payments to help those struggling during the pandemic: It took longer to reach the neediest. They were less likely to have a bank account and had to wait for checks to be written and mailed to them.

Timing is everything. “Now digital banks are popping up everywhere,” said Allen.

Unlike the others, Capway is a lifestyle brand built around financial services. It’s not just bank services and debit cards, but also education addressing financial literacy and the lack of trust that lower-income people and immigrants, particularly, have toward financial institutions.

Young people, women, and people of color are attracted to the startup because the founder represents these groups. Allen’s grandmother had kept her money in the mattress. “People told me, ‘I don’t trust banks,'” said Allen. “But, you get me. Sign me up.”

“Our content is more relatable than NerdWallet,” said Allen. It’s written for people who have $70,000 stashed away somewhere in their house, earn $100,000, but still live paycheck to paycheck, and can’t pay their bills for the next three months if they lose their jobs. It’s not just about financial literacy; it’s about people’s emotional issues with money.

“I didn’t set out to be a role model, but I take that responsibility seriously,” said Allen. When most people think of tech founders, they think of a man who went to school at Harvard or Stanford and is based in California, New York, or Boston. “No, you can be a black girl from a country town,” Allen said. She is on the 2019 Forbes 30 Under 30 list.

Back in 2015, when the opportunity to be in a documentary appeared, Allen jumped at the chance. Nora Poggi and Insiyah Saeed approached her after Allen presented at a conference. “Representation matters,” Allen said. Poggi and Saeed had directed and produced She Started It and were in the editing stage of the film.

“Being an entrepreneur is associated with being a man,” said Nora Poggi, director and producer of She Started It. One way to change this is by showing that women are taking the leap and succeeding. Society subtly and not so subtly signals to women that they are not welcome as high-growth tech entrepreneurs. The film sets the record straight and the producers wanted to include Allen.

The documentary was released in 2016. To this day, women and girls still come up to Allen to tell her what an inspiration the movie and she are to them.

How are you inspiring the next generation of female tech founders?